Rafael Ocasio has a passion for Latin American literature and culture. He shares that with the world in two ways: through teaching and through his research.

Ocasio, who was born and raised in San Juan, Puerto Rico, has been teaching at Agnes Scott College since 1989, where he is the Charles A. Dana Professor of Spanish. After receiving his undergraduate degree at the University of San Juan, Ocasio set out to further his education in the United States, earning his master’s degree in English from Eastern New Mexico University and his Ph.D. in Latin American Literature from the University of Kentucky.

He chose the University of Kentucky because he wanted to work with scholar Daniel Reedy, who was well known for his work in Colonial Latin American literature. Not only did he get to study under his mentor, but he also got his first taste of teaching.

“As a teaching assistant, I was given the responsibility to teach both introductory and intermediate courses,” says Ocasio, who up until that point still was not sure what he wanted to do. “It was a new experience and a challenge that I soon came to understand that there is no one ‘right’ way to teach a class. You are to keep adapting your teaching style to your audience always strive to keep their attention in the subject matter.”

Ocasio has been teaching for over 30 years. Currently chair of the Spanish department at Agnes Scott, he teaches Spanish language courses as well as upper-level Latin American literature classes. He also conducts extensive research that incorporates his love of Latin American culture and literature, which has resulted in six books.

Ocasio’s scholarship primarily focuses on 19th-century written in Cuba, the late dissident and Cuban writer Reinaldo Arenas, as well as oral folklore compiled in Puerto Rico by Franz Boas in 1915. His books on Cuba explore different aspects of the island’s history, such as slavery, homosexuality and exile. He has also written a book of folk stories about Puerto Rican peasants, or Jíbaros.

“A Bristol, Rhode Island, and Matanzas, Cuba, Slavery Connection: The Diary of George Howe,” published last year, analyzes the literary quality of work diaries of a Rhode Island man who took a job managing a Cuban sugar cane plantation and oversaw a work crew of slaves. His newest book, “Franz Boas in Puerto Rico: Retention and Reinvention of Puerto Rican Folklore,” examines the folk stories that were gathered and published by Boas, who is considered the founding father of American anthropology and a notable folklorist. A second book will follow with sample folktales translated into English.

With his research, Ocasio hopes to bring broader stories into focus and shine a light on Latin American culture. He tries to do the same in the classroom, where he sees himself as a facilitator. Beyond just teaching students the language, he enhances his lessons by bringing in cultural examples, including films and books, to create a world they can explore and learn about.

“I truly enjoy sharing my native language and Puerto Rican culture with my students,” Ocasio says.

“There is a little bit of a sense of a ‘mission’ in my teaching and that I am contributing to a conversation at the national level on the importance of the Spanish language and Latin-Puerto Rican cultures that historically contributed and continue to exert influence on the complex national character of the United States.” 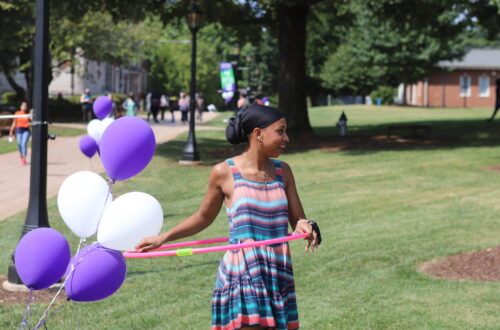